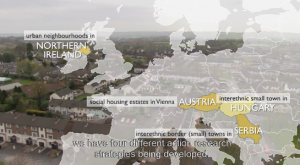 Research report on the qualitative comparative analysis for the ALTERNATIVE project (FP7): “Developing alternative understandings of security and justice through restorative justice approaches in intercultural settings within democratic societies” (2012-2014)

Read the full report (pdf) on the ALTERNATIVE project website

The ALTERNATIVE project could be imagined as an exploratory venture. It pushes the established methods and practices of restorative justice out of their applicability comfort zone, towards social conflicts in intercultural settings where many of the discipline’s assumptions dither. Following an initial in-depth conceptual mapping study, detailed plans of operation were drafted and action research started rolling in four countries. Alas, as forewarned by some Prussian general, there is no plan that survives the impact with the battlefield and things got much more complicated. To start with, as it often turns out in overseas explorations, the new territories were far from being empty spaces. In fact a variety of social workers, alternative dispute resolution practitioners, community workers and related academic fields were already thriving there. This spurred some soul searching about whether the discipline had something relevant to say or novel practices to offer. But this was the easy part. The main structural difficulty faced by the project lay in the goal itself. Restorative justice – at least the enhanced form being explored here – resorts to open dialogue and non-violent communication in order to (re)build trust among those affected by a conflict – often bitterly harmed by it. Once mutual trust is restored, participants can address their oppositions, or at least manage the conflict in a non-destructive way, eventually cooperating toward achieving some common goal in the spheres of justice and security. Unfortunately, after Robert Putnam’s findings (2007), there are some reasons to think that communication, trust and cooperation are precisely what is not going to happen in intercultural settings, those with high ethnic or racial diversity at least, where people ‘hunker down’. How to get out of the impasse? Acknowledging it, dissecting it are but the beginning of an answer.

This report focuses on data collected from the research partners in four countries (social housing estates in Vienna, a small town in rural Hungary, three border towns in Serbia, Belfast and London/Derry in Northern Ireland) during the course of the project. The qualitative methodology adopted here (chapter 1) comparatively analysed the empirical data along two main dimensions. A ‘horizontal’ one compares the findings in the different research sites between themselves, describing them in detail and evaluating the main outcomes of the action research. After identifying a certain number of conflictual situations as ‘cases’ to be studied in depth, the researchers formalised them according to a number of conditions or variables. Analysing the cases so formalised with Ragin’s set-theoretical combinatorial methods (QCA), we can highlight the following main descriptive findings (chapter 2):

— High intervention intensity practices happen only in cases with explicit and serious harm claims.
— A ‘standard’ RJ participation model where the roles of victims, offenders and community are well identified applies only in cases with explicit and serious harm claims and where there are public institutions’ representatives among the participants.
— When security, regardless of the scope of its definition, is more of a concern (high security intensity) there is always a public stakeholder present.
— The cases that are morally framed as ‘wrongdoing’ (as opposed to misbehaviour or the morally neutral conflict of interest) are dealt with more formal practices following a standard victim-offender-community participation model (as seen before); besides, these cases are associated with a wider security scope, but not necessarily a high security intensity.
A second ‘vertical’ gaze, following the ethnographic method of continuous dialogue between the etic and emic understandings of a concept in each site, aims at honing and realigning the key concepts of justice, security, conflict, community, restorative processes, active participation, trust and cooperation (chapter 3). Here are some highlights from this section.

Conflicts in the four action research sites where initially classified at different levels of analysis, from the micro (interpersonal) in Vienna, to meso (community level) in the small town in Hungary to meso-macro in Serbia and Northern Ireland. However, a closer analysis of actual conflict dynamics during field work showed that the symbolic level of activation or narrative framing (from interpersonal to communal to ethno-national, and vice-versa) of each conflict varied greatly in time, regardless of its intensity.

Early in the project the researchers made a reasoned option for an understanding of security largely in terms of personal safety that somehow prevented more complex analysis of (de)securitisation dynamics and of how to engage security apparatuses once they have formed. Participants often voiced concerns of economic and job security alongside their physical safety thus confirming, on the one hand, the implicit human security approach of the research and, on the other hand, the importance of socio-economic factors and distributive justice in the various case studies.

In order to achieve active participation that goes beyond a token of bodily presence, it is crucial to analyse in depth who are the stakeholders affected by the conflict and what are their interests. The key insight is to define participation itself in terms of the stakeholders’ actual decision making powers and the resources they can invest or claim in the process, thus owning it (participation with power and property). A promising line of inquiry, supported by research on cooperation in behavioural economics, hints at the importance of devolution of certain constituent powers to the participants, i.e. not only decision making powers within the rules of the practice, but a deliberative voice in setting the rules themselves.

Preliminary to the definition and assessment of outcomes (chapter 4), a discussion is in order about a new evaluation space – and relative metrics – better suited to alternative understandings of restorative justice and security. Should ALTERNATIVE still consider the reparation of victims’ harms, the offender taking responsibility, their reintegration in a reconciled community as the main restorative outcomes? Or do we need new evaluation criteria? Perhaps both. Ideally, the new approach experimented by ALTERNATIVE should encompass the original RJ domain while at the same time extending beyond it. The main finding within the restorative justice outcomes field more narrowly understood (section 4.3) is that the tried and tested practices of restorative justice like mediations, circles and conferences, can be effective also to address well defined conflicts arising in intercultural contexts. Or at least this has been observed, provided that the harms are claimed explicitly and are dealt with through formal practices facilitated by trained practitioners with the involvement of public institutions, including police officers. The latter may contribute to the practice’s formality and ‘seriousness,’ perhaps even adding some latent negative incentive to sustain cooperation in implementing the agreement reached by participants, provided that they are considered sufficiently ‘neutral’ relative to the parties involved. This could be a critical factor in certain social contexts where institutions tend to be weak.

Social class cleavages are the second most relevant dimension – after ethnic diversity – in the definition of the intercultural setting in all sites, just as issues of socio-economic inequality are substantially present in the definitions of the types of conflict studied in the cases. The combination of socio-economic and ethnic inequalities are the strongest social determinants of low generalised trust. Considering the central importance of trust building – at least localised trust among the participants – in restorative practices this poses a big question mark on the possibility of developing meaningful restorative methods in such contexts. At the same time, it is a contradiction that contains its own resolution. We can sketch a tripartite field of tensions between various behavioural outcomes in intercultural contexts. First, destructive open conflict, bad race relations, hostility. Second, isolation, ‘hunkering down’, withdrawal from collective life along with the securitisation of social conflict in general (from petty criminality to migrations). Third, cooperation, where higher levels of socio-economic equality, and hence of trust, allow addressing conflicts.
Therefore, especially when dealing with conflicts in intercultural settings, restorative justice should strengthen its unique approach to justice as disjoint from penal punishment, and focus especially on redistributive justice as the deep equalising factor, beyond ripples of cultural diversity, that in turn may increase the chances of people trusting and cooperating with each other. Put in another way, even if moving outside of its tested sphere of applicability, restorative justice should not stretch its supply lines too thin and keep a solid anchoring in its core business of doing justice, least it becomes irrelevant.

Seen from this perspective, the research in the four sites shows that strong leadership and steering by public institutions combined with effective socio-economic redistributive policies are associated with lower levels of active participation on the one hand, and higher perceptions of personal safety – or at least de-securitisation of issues – on the other (Vienna, Hungary in some circumstances). When public actors are effectively hegemonic, the restorative approach experimented in the project seems to act as a complementary corrective, contributing (through improved communication and dialogue) towards a more effective representation of interests and identities of stakeholders, including a partial re-appropriation of conflicts. Conversely, higher levels of active participation and mobilisation in the presence of weaker social public provision are potentially open to exclusionary practices, are associated with heightened perceptions of insecurity and are more prone to securitising dynamics. In these more competitive constellations, the restorative methods experimented in the project – in particular peace-making circles or ‘community mediation’ – might contribute towards strengthening social solidarity between stakeholders, building inter-group ‘bridging’ trust, increasing the sense of fairness in the process and improving the perceptions of safety.

Based on these general findings, ALTERNATIVE proposes a new approach for research and practice of restorative justice to conflicts in intercultural settings, articulated in three phases or interlinked dimensions that are only logically distinct: restoration of communication, restoration of trust, restoration of cooperative action for justice.